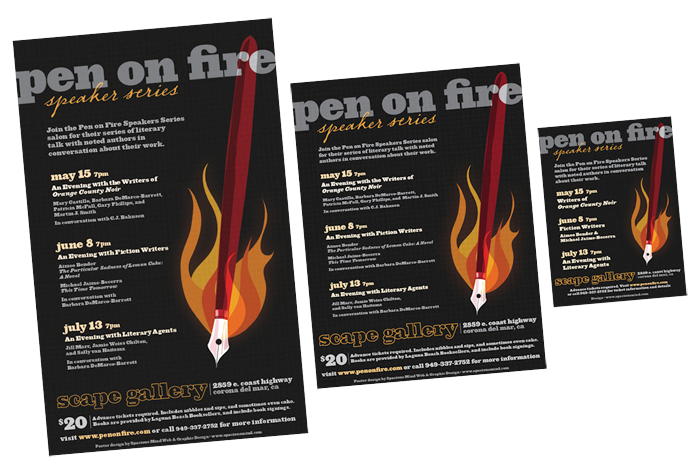 Please join noted mystery authors JENNY MILCHMAN, NAOMI HIRAHARA and DENNIS PALUMBO for a discussion titled "Elements of Surprise." Hosted by Barbara DeMarco Barrett, the event will focus on ways to enhance suspense and weave in the unexpected in your fiction.

Suspense and mystery writers have much to teach writers of literary fiction, mainstream fiction, and other genres and subgenres.  These authors will discuss how to use surprising elements in your writing, whether it be fresh characterization, misdirection in plot, restraint and hidden information, and more.  They’ll also talk about how their publishing journeys have surprised them.

No writer, seasoned or new, will want to miss this exciting evening!

Dennis Palumbo, M.A., MFT, is a writer and licensed psychotherapist in private practice. His acclaimed series of mystery thrillers, called “Riveting” by Publishers Weekly, include Mirror Image, Fever Dream, and the latest, Night Terrors. They all feature psychologist Daniel Rinaldi, a character that Kirkus Reviews calls “Jack Reacher with a psychology degree.” The next book in the series, Phantom Limb, comes out in September. All are from Poisoned Pen Press.  Dennis is also the author of Writing From the Inside Out (John Wiley), and a collection of mystery short stories, From Crime to Crime (Tallfellow Press). A former Hollywood screenwriter, his credits include the feature film My Favorite Year, for which he was nominated for a WGA Award for Best Screenplay. He was also a staff writer for the ABC-TV series Welcome Back, Kotter, and has written numerous series episodes and pilots. His first novel, City Wars (Bantam Books), is now available as an e-book, and his short fiction has appeared in Ellery Queen’s Mystery Magazine, The Strand, Written By and elsewhere. He provides articles and reviews for The New York Times, Los Angeles Times, The Lancet, and many others. He’s also done commentary for NPR’s “All Things Considered.” Currently, he writes the  “Hollywood on the Couch” column for the Psychology Today website, and blogs regularly for The Huffington Post. More on Dennis here.

After 15 years of writing and rewriting, Naomi Hirahara published her first novel, Summer of the Big Bachi, in 2004. The book, which featured a Los Angeles-based gardener and Hiroshima survivor, was among Publishers Weekly Best Books of 2004 and Chicago Tribune‘s Ten Best Mysteries and Thrillers of 2004. Her third in this Mas Arai mystery series, Snakeskin Shamisen, won an Edgar Award for Best Paperback Original in 2007. Murder on Bamboo Lane, the first in her new series with a 23-year-old female LAPD bicycle cop, was released in April 2014 with Berkley Prime Crime. Her fifth Mas Arai mystery, Strawberry Yellow, was a finalist for the T. Jefferson Parker Award, presented by the Southern California Independent Booksellers Association. A former journalist, she has also authored and edited several nonfiction books and was a consulting writer for the exhibition at the Manzanar National Historic Site’s Visitor Center. Her middle-grade book, 1001 Cranes, was honorable mention in youth literature from the Asian/Pacific American Libraries Association. Also a short story writer, Naomi is a past chapter president of the Southern California Chapter of Mystery Writers of America.  More on Naomi here.

Jenny Milchman‘s journey to publication took 13 years, after which she hit the road for seven months with her family on what Shelf Awareness called “the world’s longest book tour.” Her debut novel, Cover of Snow, was chosen as an Indie Next and Target Pick, reviewed in The New York Times and San Francisco Journal of Books, and nominated for a Mary Higgins Clark award. Jenny is also the founder of Take Your Child to a Bookstore Day and chair of International Thriller Writers’ Debut Authors Program. Jenny’s second novel, Ruin Falls, just came out to starred reviews from Booklist and Library Journal, and Jenny and her family are back on the road.


The event takes place at the Scape Gallery in Corona Del Mar.