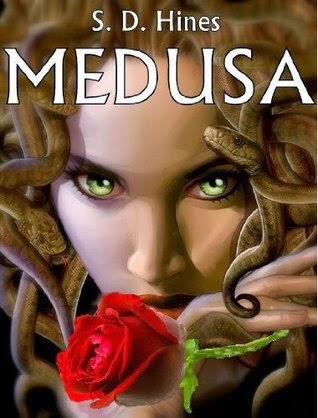 In one of the most compelling tales from classical Greece since Mary Renault's Bull from the Sea and Fire from Heaven, author Scot Hines retells the legend of Medusa in a way that makes her feel like a contemporary millennial girl with very special problems.

Despite a semi-miraculous birth in the temple of Athena, Medusa is nothing more than a devoted priestess of the goddess, distinguished only by her beauty and piety. But after she is raped by the god Poseidon, her entire world is ripped asunder and she flees Poseidon's wrath through ancient Greece and beyond for the inconceivable crime of resistance. In her wanderings, she encounters dangers and horrors, but also friends in unexpected places.

Pursued by Poseidon's fury and his assassins, she is finally cornered in Egypt with only two choices: fight back or be destroyed with all she loves. But her only hope lies with the father of her children, the great love of her life and the man who is prophesied to kill her: Perseus.

"Medusa" by S.D. Hines is a tale of epic proportions. It's also a story of Medusa like we've never seen before. We're used to seeing Medusa as the bad guy – the one with creepy snakes for hair that turns innocent victims into stone with just one look into her eyes. That's the Medusa that we're used to, but it is not the one Hines portrays.

The Medusa from this story is a kind hearted and gentle woman, who is on the run after being raped and having her life threatened by the god Poseidon. Instead of being on the offensive like the monster she's been portrayed over the years, she goes out of her way to help people and makes friends with the people she encounters on her journey.

Medusa's travels take her far and wide. She goes all through Greece, and even as far as Egypt, in her trek to save herself from Poseidon's wrath. This is an epic journey that reminded me of the one Odysseus faced. Both had to go on an adventure that lasted for years that also threw challenges and smaller battles in their way. Medusa was forced to protect herself and others during her wanderings, and as a result, was able to grow as a person and become stronger.

Something that I found interested was the little mentions about other stories that were littered throughout Medusa's. For example, while passing through Troy, she muses on how formable their boundary walls are and that it would be a very hard city to take. We also meet Moses as a baby, as Medusa was there when he was found in his basket in the reeds. I greatly liked that Hines incorporated these small asides into Medusa's travels, and it gave the reader a little something extra to hold on to.

I've already compared Medusa's story to that of Odysseus, but they aren't exactly the same. The epic journey that Hines writes is written in a way that's a lot clearer to follow with plainer language, making it an easier read than "The Odyssey". Although there are some points that got a bit too descriptive at times making the story drag a bit, it still wasn't difficult to get through.

Medusa in this story is the epitome of a good person, however we know her as anything but. Hines also finds a way to deal with this change of perception. While we get to see Medusa and how she really acts, we also get to hear the rumors that surround her on her travels since rumors travel faster than any horse. Her deeds and battles and the things she are a part of get twisted and skewed like a game of telephone, and the rumors that spread are usually a far cry from what really happened.

I always like reading about the Greek gods and myths, and "Medusa" was not an exception. I loved that Hines took a different way of looking at the character and made a new story out of something we all thought we already knew. Even though at times, it could be a slow read, it was still enjoyable and I would recommend it.