People Still Like to Read a Good (Printed) Book 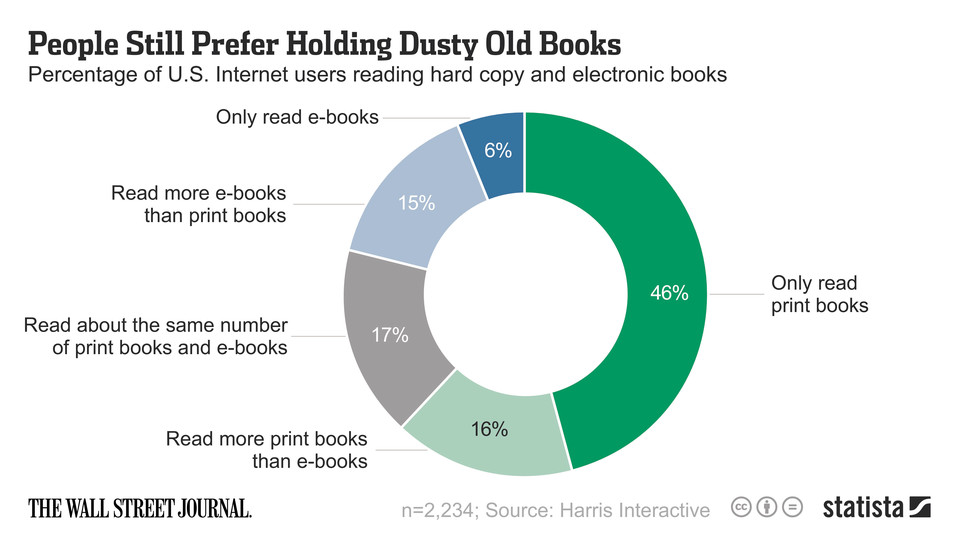 Given the news coverage, you’d think the conversion at last of Harper Lee’s “To Kill a Mockingbird” into lines of ones and zeroes was some kind of nail in the coffin for the printed word. One of the last holdouts finally turned.

Not quite. Of the people in the U.S. who use the Internet, 46% say they still only read books that are printed, according to data from Harris Interactive that was charted by Statista. Another 16% say they read more printed books than e-books.

That’s still a healthy vote of confidence for dusty tomes, considering e-reading devices have been around for about seven years in some form. Amazon’s Kindle, a popular e-reader, has been around since 2007. The iPad was released in 2010, and there have been many iterations of the two and competition from others since.

There’s little doubt which way the arrow is pointing — over time most people will be converted to purely digital readers, particularly as visual tech gets better — but for now only 21% of those surveyed said they preferred e-books. (These are people who use the Internet, mind you, not a survey of Luddites.)

Reposted from The Wall Street Journal

Email ThisBlogThis!Share to TwitterShare to FacebookShare to Pinterest
Labels: Direct Vs. Legacy Publishing