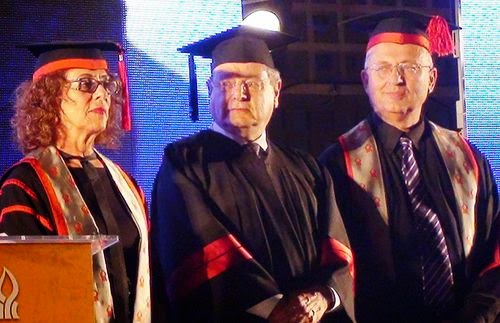 He didn’t have to be helpful. He didn’t know me or anything about me, only that I had an idea for a novel about the last living survivor of the Holocaust, and wanted to speak to him. He was intrigued, so he agreed to sit down with me after his lecture at the University of Western Ontario in London. Make that London, Ontario, a Canadian city of 350,000 people 120 miles west of Toronto.

Sir Martin Gilbert, who just passed away at the age of 78, was one of the world’s eminent historians and quite likely the leading chronicler of the worst human catastrophe we have ever seen. The official biographer of Winston Churchill and author of some 88 books, many of them on the two World Wars and Jewish history, he had been knighted in 1995 for “services to British history and international relations.” His epic work, “The Holocaust—A History of the Jews of Europe During the Second World War,” a book of almost 1,000 pages that I read and reread and marked up with highlighter and post-it notes ad infinitum, was what finally moved me from the research phase into the actual writing of my own book. The only other book of history that had such an effect on me was probably William Shirer’s “The Rise and Fall of the Third Reich.”

I had the pleasure of meeting Sir Martin on three occasions, the first time at the university in London. He said that he lived in two Londons—London, England, and London, Ontario, where he was a guest lecturer. There we were, along with his wife Esther, sitting in a university cafeteria, surrounded by a throng of students who didn’t seem to know him from Adam. I told him about my premise—a novel set in the near future about a 100-year-old Holocaust survivor who is caught in a world that is woefully ignorant of the past century.

Did he think it far-fetched? No, not at all. And then he offered me this tidbit: “Why don’t you have an event in the year 2030 that would eclipse the Holocaust?”

Hmm. What a thought. And that’s exactly what I did.

Gilbert’s book, the quintessential treatise on the genocide of Jews during World War II, should be required reading for any history course on the 20th century. His website describes it this way: “A comprehensive history of the Holocaust, stressing the human aspect, and telling the story of the deliberate murder of six million men, women and children through the words and experiences both of the murderers and of their victims.”

In typical Martin Gilbert fashion, the book also includes “34 photographs and 23 maps, each map specially prepared by the author to locate every place mentioned in the book, and every phase of the Holocaust.”

To call him meticulous would be an understatement.

Of course, he also wrote other books like “The Righteous—The Unsung Heroes of the Holocaust,” an examination of non-Jews in Europe who risked their lives to help save Jews. Churchill aside, he wrote biographies on such dignitaries as Lloyd George and Anatoly Shcharansky, and in addition to Jewish history, he wrote books about British history and European history. He also put together vast collections of photographs, documents, maps, and letters that would more than arm any prosecutor in a modern-day Nuremberg trial.

The contribution this man made to history is beyond measure. He wrote about Soviet refuseniks and was known to be a devout Zionist, but he was also part of a not-for-profit think tank committed to improving conditions for Palestinians on the West Bank. A master documenter of events who would leave no stone unturned, he brought a sense of purpose and balance to everything he wrote.

I still have the emails he sent me in response to my question about finding former child survivors of the Holocaust. He was quick to provide names and organizations. More recently, he was in town to do a book signing for “Will of the People—Winston Churchill and Parliamentary Democracy,” and asked how my novel was proceeding.

The third time I saw Gilbert was when I attended a lecture in which he talked about his childhood, and how he was evacuated to Canada during the war when he was 4 years old. I brought my wife and daughter along to that one. He said he always had a soft spot in his heart for Canada.

Sir Martin Gilbert mixed with opera stars like Placido Domingo, and he knew a number of world leaders, presidents, and prime ministers alike. Gordon Brown, when he was prime minister of Great Britain, had asked him to serve on a task force looking into the Iraq war. While comfortable in these circles, he was also a most generous man, and I had the pleasure of learning that first-hand.

He will be missed.

Jerry Amernic is a Canadian writer of fiction and non-fiction books. He is the author of the new Holocaust-related novel “The Last Witness.”