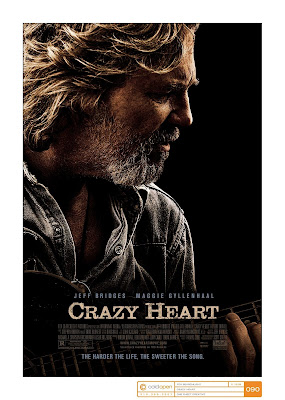 Film opens Dec. 16: Once a headlining Country and Western star, Bad Blake (Jeff Bridges) is now lucky to get a gig at a bowling alley in Pueblo, Colo., which is where we first meet him in Crazy Heart. At a grizzled 57, he's a broke, chain--smoking alcoholic with four marriages under his belt and a tendency to run outside to vomit in the middle of a set. Still, he hasn't lost his voice, or, when he needs it, his charm, so you can understand why Jean (Maggie Gyllenhaal), a small-town reporter who wants to interview him, might, against her better instincts, fall for him. (Article continued below…)

We're drawn to him too, no matter how many times we've seen these self-destructive singers onscreen before. There's something irresistible about the anti-glamour of crashing stars. Think of Rip Torn in the 1973 Paydayor Robert Duvall in 1983's Tender Mercies. Actors love these roles, and they bring out their best. Bridges is phenomenal. He knows this guy inside out, from the way he straddles a chair onstage to the way he argues with a sound man when rehearsing for a big Santa Fe, N.M., concert, where he reluctantly plays warmup to Tommy Sweet (Colin Farrell), the protégé whose success has eclipsed his own. Bridges, whose instincts are as good as any actor working, never hits a strained note.

First-time director Scott Cooper, who wrote the screenplay from a Thomas Cobb novel, gives his cast (which includes Duvall, in a small but tasty role) lots of breathing room. What he prizes in this character study is not originality, but authenticity. From the songs Blake sings (written by Stephen Bruton and T. Bone Burnett) to the light in the eyes of his aging groupies, the details feel right. Crazy Heart gets to you like a good country song—not because it tells you something new, but because it tells it well. It's the singer, not the song.