‘Crazy Heart’ has the goods 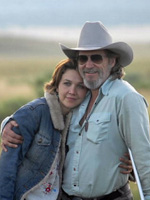 It’s not just Jeff Bridges who leaps onto the Oscar landscape with Scott Cooper’s “Crazy Heart.” It’s possible in a few months that we’ll be talking pretty seriously about Maggie Gyllenhaal in the supporting actress race and, most certainly, T-Bone Burnett’s contributions as the film’s music supervisor.

Fox Searchlight screened the film this morning to a handful of press and will do so again this evening, looking to gauge reactions to what could be a big boost both on the awards front and commercially. With “Amelia” losing money at the box office and a dwindling slate of product for the Oscar push, it seemed almost inevitable that this little mid-summer pick-up would find its way onto the 2009 schedule. More and more, that’s looking to be the case.

But back to the film. I would rather not offer up a proper review for a movie that hasn’t been color-timed, still has some sound mixing work to be done and, on the whole, just isn’t finished yet, but I feel comfortable calling it a slow burn that settles warmly in the tradition of “Tender Mercies” or “Nobody’s Fool.” While it might be unfair to reduce it to a “country-music ‘Wrestler’” (as The Hollywood Reporter’s Steven Zeitchik did yesterday without having seen the film), that is nevertheless a pretty streamlined way of describing the narrative.

More importantly, however, that “performance of a lifetime” from Jeff Bridges that Fox Searchlight was on about when the studio bought the film nearly four months ago? I think it could be this year’s Oscar-winning lead actor turn walking away.

Bridges fully embodies the broken but spirited Bad Blake, an alcoholic country singer touring the Southwest in his 1970-something Suburban, playing any dive that’ll have him. He brings every inch of charisma and charm he has to a role that certainly doesn’t seem made for him on the surface, but somehow ends up entirely owned by the actor come film’s end.

Bridges haunts the stage behind a dark pair of aviator sunglasses, under a silvery, unshampooed mane, unmistakably conjuring the image of Hank Williams Jr. as he belts out a number of tunes from gig to gig. He shares the screen with Maggie Gyllenhaal, who plays Jean, a journalist and single-mother love interest. Gyllenhaal holds her own and provides a complex, emotional core to the story that could also nail down a few kudos here and there.

Colin Farrell has something of a glorified cameo as Tommy Sweet, a famous modern country star who owes his career to Blake, while Robert Duvall (who also serves as one of the film’s producers, along with Burnett, in fact) offers a small but meaningful supporting turn as Blake’s confidante.

Speaking of Burnett, it’s entirely likely (barring any unforeseen music branch silliness…which, you never know) he and his team will be recognized for the original songs that appear in the film, something like seven or eight tracks that should make for a wonderful soundtrack. The title song, “Crazy Heart,” is probably the best bet, as a number of moments in the film’s third act are dedicated to Blake’s writing the song, which draws upon his emotional journey as an alcoholic seeking sobriety. The tune also plays in the final scene and through the closing credits. I couldn’t get it out of my head on the drive home. “Pick up your crazy heart and give it one more try.” (Check out one of the songs, performed with Farrell, in the clip below.)

Other nods could follow. Best Picture might be a longshot given the scope of the film, though an adapted screenplay notice for Cooper is certainly possible. But the story here, it goes without saying, is Jeff Bridges.

From where I sit, I’m having a hard time arguing with his potential as this year’s Best Actor Oscar winner — especially when you look at the competition. George Clooney, Daniel Day-Lewis, Morgan Freeman — they all have their Oscar. The potential for a big awards comeback from Robert De Niro was considerably muted when “Everybody’s Fine” landed with a thud at AFI Fest last night, while other contenders just won’t have the strength of “The Story” that a Bridges campaign will have.

The man is one of the great unrecognized American actors. “Crazy Heart” will give voters a chance to both remember his consistency, recognize that he remains Oscarless and, best of all, feel good about checking the box next to his name. Because this really is one of his finest moments.

I imagine we’ll be talking about “Crazy Heart” more and more in the coming weeks and months, but those hoping for a last-minute shake-up certainly look to get their wish. These are the moments I live for in an Oscar season.