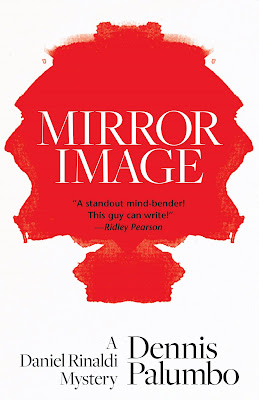 Dennis Palumbo's new crime novel, Mirror Image, is on sale now. It's the first in a new series featuring psychologist Daniel Rinaldi, a trauma expert who consults with the Pittsburgh Police.

Specializing in treating victims of violent crime, Rinaldi’s world is turned upside-down when one of his own patients is brutally murdered. Determined to help find the killer, his journey takes him through a labyrinth of mystery, deceit and unexpected danger.

The publisher is "Poisoned Pen Press, and they've done a wonderful job with the book. It's available in hardcover, trade paperback and as an audio book.

"Dennis Palumbo establishes himself as a master story-teller with his first crime novel, Mirror Image. Using his background as a licensed psychotherapist to good advantage, Palumbo infuses his fast-moving, suspenseful story with fascinating texture, interesting characters, and the twists, turns and surprises of a mind-bending mystery. Very impressive."

"Mirror Image is a rich, complex thriller, built around a sizzling love affair. A compelling read, with surprising twists and characters that leap off the page."

"Mirror Image is a deviously plotted thriller with lots of shocks and surprises you won't see coming, and a smart, sympathetic hero-narrator who takes you along as he peels back layers of lies and wrong guesses to get closer to the truth."
---Thomas Perry (Edgar-winning, New York Times best-selling crime novelist)

"Dennis Palumbo's experience as a psychotherapist hasn't just helped him make his hero, therapist Dr. Daniel Rinaldi, authentic, human and a man in full, it's endowed him with the insight to craft a debut thriller filled with action, deduction and romance, expertly paced for maximum suspense."

"Dennis Palumbo's novel is stark and disturbing but there's a humanity running through the core of it that makes this book special. Maybe it's Palumbo's dual training – as a writer and as a psychotherapist – that allows him to plumb the depths and bring up not only darkness but those occasional diamonds of light that sparkle and illuminate and make a book worth reading."

"Mirror Image is a standout mind-bender! A wonderfully constructed novel that has you seeing double---and all through the eyes of an intriguingly fresh character: a psychologist. Dennis Palumbo knows his craft. This guy can write."

"A gripping thriller, chock full of the desired twists and cliffhangers, with the added layer and intriguing access of a therapist narrator/detective. A page turner!"

Click here if you'd like to support independent bookstores. Find indies stores in your specific area in the U.S. and Canada.