A Secret Service Agent Remembers: ‘I Wish I Had Been Quicker’ 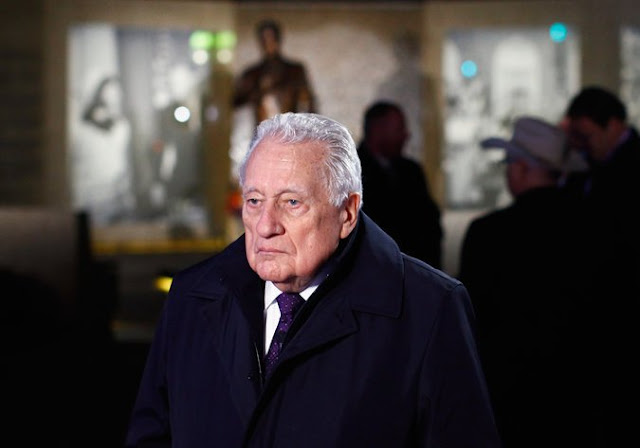 WASHINGTON — It was just before noon, in the last hours of a half-century wait for government documents about the assassination of John F. Kennedy, that the octogenarian Secret Service retiree shuffled into his first TMZ moment.

“A lot of people always have these different conspiracy theories,” a cameraman for TMZ, the gossip site, began, ambushing the former agent, Clint Hill, outside his hotel here on Thursday. “Do you sometimes hear it and wonder it yourself?”

Mr. Hill stared back at him.

The release of documents concerning Kennedy’s death has captivated historians both professional and amateur, returning a seminal moment of the modern presidency to the forefront of the American psyche.

Purveyors of conspiracy have long awaited the documents, eager to find in them any cracks in the authorities’ official account from Dallas.

On Nov. 22, 1963, Mr. Hill, long assigned to protect Jacqueline Kennedy, was positioned on the “running board” of the car behind the president’s, poised to move quickly if necessary.

As the vehicles rolled, Mr. Hill heard an explosion from his right. He turned toward the sound. Kennedy was grabbing at his throat and lurching to the left.

Mr. Hill raced toward the vehicle — the heroic agent in now-iconic images from that day, climbing aboard Kennedy’s car.

Mr. Hill did not hear the second shot as he hustled to the first family. He heard, and felt, the third. Then he draped his body over the Kennedys. If a fourth shot came, Mr. Hill resolved, it would hit him instead.

“I wish I had been quicker,” he said Thursday.

Making the Washington rounds on the occasion of the documents’ release — somberly greeting well-wishers, signing photographs of his act, demurring at any suggestion of his bravery — Mr. Hill spent his Thursday in search of something more complicated than closure, less tidy than simple vindication.

For decades, Mr. Hill has hoped for clarity on certain questions: Why did Lee Harvey Oswald do it? What was known about his activities in the months before the shooting?

Mr. Hill has not wondered who, precisely, was responsible for the violence of Nov. 22. It was one man, he said — a single gunman, three shots. He believes he is right not because he guessed right, not because he obsessed over it remotely, but because he was there, a fact that has informed every day of his life since.

There has been deep depression, unshakable self-interrogation, a nasty drinking habit.

It was Mr. Hill who could see the hole in the president’s skull that day; Mr. Hill who supplied the instant prognosis, turning to flash his colleagues a frantic thumbs-down; Mr. Hill who informed Robert F. Kennedy by phone, “It’s as bad as it can get.”

The president’s brother hung up.

“You have to relive it all,” Mr. Hill said softly on Thursday, shifting slightly in his seat. “But I’ve been doing that for 54 years.”
Photo
Mr. Hill in Fort Worth on Nov. 22, 2013, the 50th anniversary of the assassination of John F. Kennedy. Credit Tom Pennington/Getty Images

He wondered aloud why the current one had often floated a baseless theory connecting Oswald to the father of Senator Ted Cruz, a rival for the Republican presidential nomination last year.

“It’s damaging to the presidency, to the office,” Mr. Hill said of President


He held forth on Caroline Kennedy (“smart girl — I guess I should say ‘lady’ now”), Poland Spring water (“Eisenhower’s water! We used to carry that”) and Roger J. Stone Jr., the longtime conspiracy monger and informal adviser to Mr. Trump, whose name was invoked on cable television before Mr. Hill was scheduled to appear on Thursday morning.

“Turn to your left,” he told a seatmate in the MSNBC waiting area, apparently willing to offer a candid assessment of Mr. Stone only if cameras could not decipher any eye contact. “Roger Stone. Ugh.”

For most of his life, Mr. Hill, a North Dakota native who now lives outside San Francisco, has been disinclined to discuss the assassination in public. An exception came in 1975, shortly after he left the Secret Service. During a “60 Minutes” interview with Mike Wallace, Mr. Hill said, he broke down when questions about Dallas caught him off guard.

The next several years were spent largely confined to his basement, he said, sequestered from loved ones and drinking heavily. In the early 1980s, a friend convinced him his choice was clear: Change or die. He cleaned up.

By 1990, while in Texas for a conference, Mr. Hill steeled himself to return for the first time to the site of the assassination. He ventured to the sixth floor of the Texas School Book Depository, where Oswald aimed his rifle at the president, according to the Warren Commission.

“I checked everything,” Mr. Hill said. “Angles. What was the weather like that day? Where exactly was the shooter? Where were we? Everything. And I finally came away knowing that I had done everything I could.”

Guilt and shame persisted, he said, trailing him into old age. In 2009, a friend and former agent asked for his assistance on a book. Talking helped, Mr. Hill found. He decided to do more of it.

His own book followed, a tribute to the woman he protected, titled “Mrs. Kennedy and Me,” written with Lisa McCubbin. They have since written two more books about Mr. Hill’s career.

By now, Mr. Hill said, the conspiracy theories are little bother, even if he doubts that the document disclosure will discourage them much. On one count, though, Mr. Hill has remained vigilant in defense of his president.

“One last thing,” the TMZ emissary shouted as Mr. Hill returned to his hotel. “Marilyn Monroe!”

Mr. Hill cut him off. “That’s a fallacy,” he said. “Never saw her. And I was there a lot.” He ended the interview, stepping toward the hotel entrance, then turning back to ensure he had dispatched the only cameraman.

The doors closed, and Mr. Hill appeared relieved. There was no second shooter.

A version of this article appears in print on October 27, 2017, on Page A15 of the New York edition with the headline: An Agent Remembers: ‘I Wish I Had Been Quicker’.