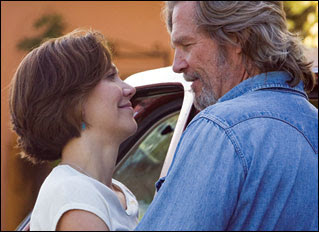 There's more to it than that. Until recently, most specialty distribs conservatively pre-bought, co-financed or acquired completed films out of festivals, so this pre-festival-season worldwide acquisition marks a sea change. Searchlight is not alone in seeing more submitted films ahead of fests, now that a North American sale is far from guaranteed. In this case, the main reason for a distrib to pick up a movie like this: an Oscar play for Jeff Bridges. If that were the case the movie would be booked at Telluride or , which both wanted it. But Searchlight is heading for 2010 release. That's because yes, they do want to put Bridges in play. But they also want to tweak and cut the film--and not show it at festivals until it's polished. The old strategy of throwing a swiftly edited film into a fest and seeing what happens is foolish. People are more wary of taking those chances. "People are more likely to take a bird in had than wait for the bird in the bush," says one studio acquisitions exec. "They may not get one."

The foreign market isn't what it was, and neither is the domestic. Financeers want to make sure they get domestic distribution. That's the only way they'll get their money back.

The good news for Crazy Heart: with engaging stars and an accessible country soundtrack, the movie has commercial potential between the coasts, which makes Searchlight the distrib best-positioned to take that advantage.

The full press release is on the jump.

Fox Searchlight Pictures Presidents Stephen Gilula and Nancy Utley announced today that the company has acquired worldwide rights to the moving drama CRAZY HEART. Written and directed by Scott Cooper and adapted from Thomas Cobb’s book of the same name, CRAZY HEART stars Jeff Bridges, Maggie Gyllenhaal and Robert Duvall with an original soundtrack by T-Bone Burnett. The film was produced by Judy Cairo, Scott Cooper and Butchers Run's Rob Carliner and Robert Duvall. The film is scheduled to be released in Spring 2010.

“Jeff Bridges delivers the performance of a lifetime and the entire cast is fantastic in Scott Cooper’s powerful film,” said Utley and Gilula. “We are thrilled to be bringing this film to audiences everywhere.”

“Being acquired by Fox Searchlight is the highlight of my professional career. Their illustrious release record speaks for itself,” says Cooper. “I’m thrilled to be working with Nancy, Steve, and Claudia, and I'm elated CRAZY HEART has found such a special home.”

CRAZY HEART stars Jeff Bridges as an aging country music legend wrestling with his loss of fame at the hands of younger protégé. Struggling to make ends meet playing one small gig to the next in the twilight of his career, he finds unlikely inspiration in a small town reporter (Gyllenhaal) and her young son.

The deal was brokered on Fox Searchlight’s side by Executive Vice President of Worldwide Acquisitions Tony Safford and Vice President of Business Affairs Megan O’Brien. ICM arranged financing on the project and acted as the worldwide sales agent. ICM represents Duvall, Cooper, Carliner and Butchers Run.

Fox Searchlight has acquired worldwide rights to the Jeff Bridges starrer "Crazy Heart" for release in the spring.

Bridges plays an aging country singer in "Heart," which multihyphenate Scott Cooper adapted from Thomas Cobb's book of the same name while getting a first directing credit. Maggie Gyllenhaal and Robert Duvall co-star in the pic, which boasts an original soundtrack by T-Bone Burnett.