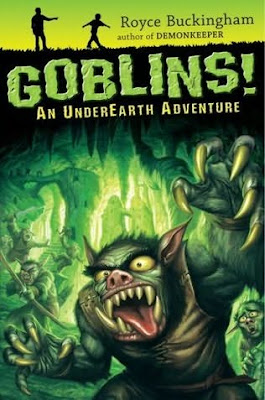 PJ put on one of his father’s spare POLICE jackets. “C’mon, we’re already here. Besides, you said it takes an hour round trip to get to the border crossing and back. Any smugglers would probably still be forty minutes away.”

PJ was reaching to put the car into park when something moved in the darkness. A patch of shadow shifted against a background of dark trees. As soon as he noticed it, it was gone. “What was that?” he said.

“What was what?” Sam said, staring into the forest. “I can’t see a thing. It’s pitch-black.”

PJ reached down and flipped the headlight switch. The sudden light glared on a dark, husky human shape in front of the car. It waved a club-shaped object and brought it down onto the metal hood of the cruiser.

PJ’s foot was still on the gas pedal. He jammed it down instinctively, and the car lurched forward. There was no time for the figure to move. Thud! It went down like a bowling pin and disappeared beneath the bumper.

PJ hit the brakes and the police cruiser jerked to a stop. He took a deep breath and quickly locked the door.

“I know,” PJ breathed, staring into the woods.

“What if he’s a farmer or something?” Sam said.

“You’re the one who screamed that he was a smuggler.”

A low, pained growl rose from beneath the car.

“We can’t leave him,” Sam said. “There’s no way he can be okay after you smushed him.”

PJ shook his head. “Dude, I just ran over a guy in a borrowed police car. My instincts tell me to drive far away and never speak of this again.”

Goblins! by Royce Buckingham has been some of the most fun 200-some pages of reading I’ve had in a while. The characters are normal, average teens who are called upon to act in extraordinary ways to save each other and to protect their world from the goblins of the UnderEarth.

One of the things I like about this book is that there are no 100% evil bad guys in the book, they’re a mix of good and bad. While PJ would prefer to stay out of things, he chooses to step up and take responsibility for his actions and for Sam, who was left in his care by his father. Sam wants adventure, and bites off a lot more than he can chew, but nevertheless manages to prove he has a heart of a warrior. The goblins have silly, descriptive names like “General Eww-Yuk,” “Slurp,” “Slouch,” “Thick,” etc, enjoy eating humans, fighting, humans as well as each other, are dumber than a bag of hammers, yet they are extremely inquisitive and quick to learn and adapt.

Another thing that I liked about Goblins! is that the writing is simple, the details are just enough to make things easy to picture but not so thick that it bogs you down. At times it reminds me of The Spiderwick Chronicles, and at other times Verne’s Journey to the Center of the Earth.

Besides having a highly imaginative setting and great actions scenes, including 7 foot bugs-versus-human battles, it also has a great sense of humor. It is a book with teenagers as the heroes and main characters, so the surliness and sarcasm of the age often shines through. For instance: When Sam is brought before General Eww-yuk by the goblin Bargle

“Have you talked to it?” Eww-yuk asked.

I think this book is ideal for the tweenage-early teen years, 9-14, and probably more for boys than girls, though I think Mags will enjoy and laugh at it. I’d also like to warn that this book does contain the deaths of central characters that readers may get attached to, so if your reader is potentially sensitive to this, then you might want to wait.

For being one of the most enjoyable, reality-suspending, relaxing books I’ve read in a long time, a book that wasn’t teaching the reader or delivering a message (if it was, I didn’t notice at all), a book that was just like losing 25 years and being on the playground again… I give Goblins! An UnderEarth Adventure by Royce Buckingham 4 out of 5 stars. It probably won’t win any awards, but it is pure pleasure.