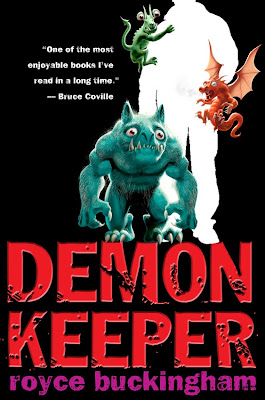 With his mentor gone, teenaged Nat is the sole human in charge of a house filled with demons. He is still learning the ropes of living in a house that is literally alive, not to me ntion dealing with the Beast in the basement that would love to escape and indulge his appetite which includes a taste for animals and humans. While Nat isn't totally alone - he has the companionship of his dog Bel and three minions, Pernicious, Nikolai, and Flappy - he still longs for human friends and enters an uneasy relationship with junior librarian Sandy and street urchin Richie. Nat tries not to let these friendships interfere with his demon keeping duties but little does he know that he's going to need their help when things go horribly wrong in the house and his predecessor, the Thin Man, heads back to town wanting his job back.

"Demonkeeper" is a deliciously creepy yet wickedly funny novel aimed at readers aged 9 -12. Author Royce Buckingham has done a wonderful job of creating a world filled with demons, especially the house Nat lives in which is filled with usually inanimate objects like rugs, lamps, and plants that are alive. The book is filled with nonstop action, starting from the very first page and readers will sympathize with both Nat and Richie who seem to go from one bad situation to another without ever feeling safe. Buckingham has a wonderful sense of humor and does a great job of mixing horror with humor. While there are plenty of scary moments and plenty of implied gore especially involving the beast, nothing is graphically described so it's not too tough to read for younger readers. Underneath the fun and scary moments, there is a sense of sadness throughout the=2 0book. Outside of Sandy, whose parents are mentioned but not seen, all of the children in the book are orphans forced to survive on their own. The only "adult" in the book is the Thin Man who is hardly a role model.

"Demonkeeper" is a wonderfully inventive, Stephen King-like novel for children.