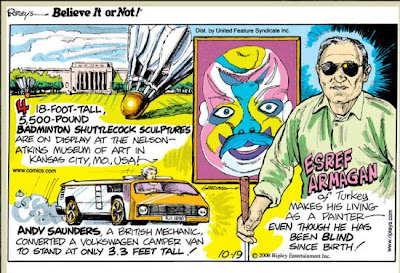 Jim Carrey has been attached to play Robert Ripley, the cartoonist at the center of Ripley's Believe It or Not!, through a series of writers and directors. He was not happy with the biographical script to be directed by Tim Burton. Now Chris Columbus is attached to direct a more fantastic version.

The film began as a biopic written by Scott Alexander and Larry Karaszewski (Man on the Moon, The People vs. Larry Flynt). Now has John Collee (Happy Feet, Guardians of Ga'Hoole) writing away under his command.

"We should see a draft in the next few months or so, and then we'll make some sort of decisions," said.

Robert Ripley, who died in 1949, presented oddities from his world travels in his comic strip "Ripley's Believe It or Not," as well as in radio and TV shows and other media. would not reveal any specific oddities that the movie might portray in chronicling Ripley's travels, but he promised to take inspiration from the source.

"I think we'll certainly relate to the comic strip a lot in the film," said. "I don't want to talk too much about it, because there are too many surprises."