Against the tools of an assassin
BYLINE: By Muriel Dobbin SPECIAL TO THE WASHINGTON TIMES


When the president of the United States is assassinated, it splits the nation in grief and pain and leaves the group of men assigned to protect him to live with the corrosive guilt of personal failure. 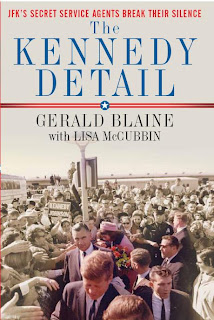 These men are the Secret Service, the dark-suited, implacable agents with sunglasses and wrist microphones whose duty is to protect the president, and this book is remarkable in its poignant yet terse presentation of the day President Kennedy died and plunged America into mourning. The men who recount that tragedy are men who didn't talk about it, even to each other, for almost half a century. But none of them could forget what they saw, especially Clint Hill, the agent assigned to Jacqueline Kennedy, who leapt onto the back of the presidential limousine as the president's head exploded in blood and bone into the lap of the first lady.

Kennedy's death led to years of speculation about conspiracies by the Mafia, Cubans angry about the Bay of Pigs, and even a suggestion that the Secret Service had been involved in the killing of the president. That was a wounding accusation against men who are trained that part of their mission is to take a bullet for the president to save him. And the pressure to at last relate the facts as they remembered them contributed to the joint decision by Gerald Blaine and Mr. Hill to write and talk about what they all remembered as "that dreadful day in Dallas."
They drew upon the Kennedy detail's reports, from investigations and notes sealed after the assassination, locked away in attics, the facts that could not be blotted from the memories of those who were there.

Mr. Blaine was one of the 34 men on the Kennedy detail and had been one of six protecting President Eisenhower. He suggests that in 2008, more money was spent on protecting presidential candidates than on the entire Secret Service budget to protect John F. Kennedy in 1963. Mr. Blaine, who retired from the Secret Service in 1964, stresses the importance of the individual relationships the agents had with the presidential couple and their children. In those days of sparse coverage, there was considerable one-on-one communication between the agent and his charge.

Mr. Blaine notes the difficulty of persuading Mr. Hill to become involved in the book project that would probe his deepest pain, observing "Clint, more than any of us had suffered tremendously." Yet as they talked and reminisced over a lengthy period, he recalls, it was as if their former personalities began to emerge. "The healing had finally begun," writes Mr. Blaine.
In a foreword to the book, Mr. Hill writes of how often his mind "rewinds" to Dallas. "It has taken me decades to learn to cope with the guilt and sense of responsibility for the president's death, and I have made it a practice to keep my memories to myself. I don't talk to anybody about that day," he writes. It was in the belief that Mr. Blaine would tell the Kennedy detail story "with dignity and unwavering honesty" that Mr. Hill eventually acquiesced.

"I knew the ensuing discussions would inevitably reopen wounds that have never fully healed, but I also realized that for the sake of history, it was important," he writes. Mr. Hill adds that he knew various researchers and filmmakers would never accept the results of the Warren Commission probe into the assassination, and comments, "The information presented by the majority of these people is theory, not fact. They were not witnesses to the assassination and have little or no knowledge of protective procedures. They were not in our shoes that day in Dallas, and we must learn from the real facts."

Mr. Hill was the agent assigned to Mrs. Kennedy, while others were assigned to the "Kiddie Detail" - meaning Caroline and John Jr., known as John John. According to Mr. Blaine, the Kennedys made sure that their children were polite to their agents, and John and Caroline evidently grew fond of them. There is a touching account of how the little girl rolled down the window of the limousine in which she was riding to the Capitol on the day of the presidential funeral and clung to the hand of her agent, who was walking beside the car. There is the sad story of how the president's son reacted to being photographed after the assassination. "Why are you taking my picture?" he asked his agent, "My daddy's dead." And the Kennedys apparently treated the detail with consideration and concern. President Kennedy
was known to distribute a pile of his own short-sleeved shirts to agents sweltering in the sun at Hyannis Port, Mass., and to bring a scarf and gloves for an agent shivering in the cold of New York. But the president was also stubborn about too much security, which gravely worried the agents.

On one occasion, Kennedy ordered the departure of the "Ivy League charlatans" guarding the back of his car, meaning the dark-suited agents. "People have to see me if I'm running," he told them repeatedly. Mr. Hill traveled the nation and the world with Mrs. Kennedy, whom he described as "very intelligent and very strong-willed." They had "a very good professional relationship," he recalls. He also remembers the faint exasperation she showed when she was waxing enthusiastic about her trip to India, and he maintained his customary stony expression.
"Mr. Hill," said the first lady, "doesn't anything impress you?"

Yet there was real affection and communication between them, and it was poignantly expressed on that grim Dallas trip, when she turned to him at Parkland Hospital, where the president lay dead and asked softly, "Mr. Hill, what will you do now?"

Yet the nightmare did not end at Dallas, Mr. Blaine emphasizes. The assassination opened the doors to a deadly wave of accusations and conspiracy theorists. It also put the Kennedy detail to work for President Johnson, whose virtues rarely included courtesy toward his staff and who didn't trust those who had been the guardians of his predecessor. There is one darkly hilarious account of how a nervous agent unexpectedly encountered Johnson rounding the corner of the house they were guarding and came very close to shooting him.

Yet Johnson and Mr. Hill became friends as they worked together, and when he returned to Texas, the president offered the agent the job of chief of operations at the LBJ ranch. He didn't take it. The book is full of anecdotes, recollections and accounts of the intricate planning for the agents that went into a presidential campaign trip. It vividly recalls the days of Kennedy, a president who loved motorcades in an open car, inherited the Cold War and was sharply tested by the Cuban missile crisis which, Mr. Hill contends brought the United States within an "eyelash" of nuclear war.

Mr. Blaine also notes grimly that today the tools of the assassin are far more sophisticated, at least one reason why the Secret Service now has around 4,000 agents, compared with 400 in 1963, and a budget of about $1.6 billion.

The book does not offer any salacious details about the much-discussed private life of the Kennedys. Mr. Blaine takes the position that the president has a right to privacy, and it is the responsibility of the Secret Service to ensure he has it. There is a terse reference to the famous "happy birthday" sung to President Kennedy by Marilyn Monroe, who was wearing a skintight sequined gown. Mr. Blaine acknowledges he was on duty that glamorous night, and with characteristic Secret Service circumspection, reports, "Miss Monroe left before the other guests."

Muriel Dobbin is a former White House and national political reporter for McClatchy newspapers and the Baltimore Sun.