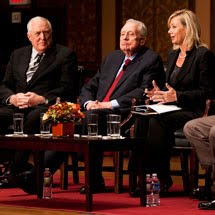 President John F. Kennedy’s secret service agents worked for about $1.80 an hour, according to those featured in a Discovery documentary screened for the first time at Georgetown Nov. 8.

They also had no computer databases to work with – just 3 x 5 cards in their pockets with names of people threatening JFK.

“We were pre-technology,” former agent Gerald Blaine told a packed audience in the university’s Gaston Hall. “We operated by hand signals. …The one thing we always feared was somebody in a window or hidden away with a rifle, which is what happened.

The publishing of The Kennedy Detail, Blaine’s book with journalist Lisa McCubbin, coincides with the documentary of the same name.
Georgetown Connections

A Georgetown alumnus, Kenneth Atchity (C’65) served as an executive producer of the documentary, which premiers Nov. 21 on the Discovery Channel.

The book authors and four other agents assigned to protect the Kennedy family came to Georgetown at the behest of University Librarian Artemis Kirk, who noted that the university has a large collection of intelligence and espionage materials.

“These materials assist faculty, students and researchers in a wide range of disciplines from peace and security studies, to international diplomacy and global area studies,” Kirk explained.
No Conspiracy

Blaine said he wrote his book “mainly because history today has been written by what I call a cottage industry, called conspiracy.” He said conspiracy rumors surrounding Kennedy’s assassination are pure fiction.

“It’s been 47 years,” he said. “Anybody who’s worked investigations on conspiracy will tell you that if a conspiracy lasts for 60 days it’s a miracle. But over 47 years there has not been one single bit of evidence to show that it was a conspiracy.”

Max Gottlieb (C’14) asked if the agents ever felt nervous watching other presidents travel. Former agent Clint Hill, who jumped on the back of Kennedy’s car after the first shot was fired, said that he does, and cited President Obama’s trip to India this week.