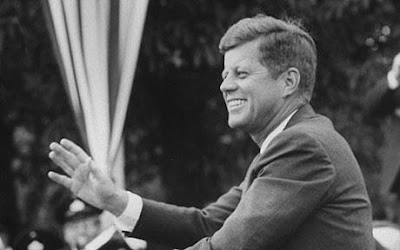 A four-way partnership of publishers and television networks are set to release an enhanced eBook about JFK. The new book was written by Gerald Blaine and Lisa McCubbin and is entitled “THE KENNEDY DETAIL: JFK’s Secret Service Agents Break Their Silence.”

Gallery Books, Simon & Schuster, CBS News, and the Discovery Channel are teaming up to release the new book at the same time as a new television documentary about JFK’s presidency. The documentary will air on November 22nd at 9:00pm EST on the Discovery Channel. Among the features of the enhanced eBook are 18 video clips from a “60 Minutes” interview with Secret Service Agent Clint Hill. In the interview, Hill tells Mike Wallace about the assassination of JFK.

The book is being released as part of a 50th anniversary celebration of JFK’s election and will be available in the iBookstore and on Kindle. Another eBook was recently released to celebrate the 50th anniversary, which was entitled “JFK: 50 Days.”Simon & Schuster Releasing Enhanced JFK eBook