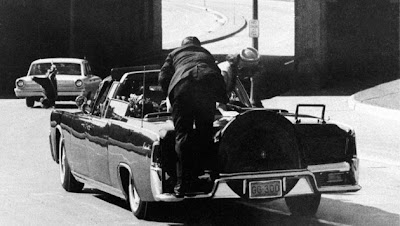 Today is the 47th anniversary of the assassination of President John F. Kennedy.

On that day in 1963, five Secret Service agents were assigned to protect the president and his motorcade. And for nearly a half-century, those men have remained silent about the horror they experienced that afternoon.

But now they’ve broken their silence. Gerald Blaine was a member of the so-called Kennedy detail, and he has written a new book about what he and his colleagues went through that day — and in the decades following the president’s death.

Blaine’s book, The Kennedy Detail, is based on interviews with numerous Secret Service agents who had been charged with guarding the president, including Clint Hill. On November 22, 1963, Hill was traveling in the car behind the president’s in Dallas, and the day is still clear in his memory.

“There was an explosive sound from my right rear,” Hill said. “I had been looking to my left at Dealey Plaza, where there were some people but very few. When I heard the explosive noise from my right rear I scanned from my left to my right. In so doing, my eyes went across the back of the car. I saw the president grasp at his throat and lurch slightly to his left, and I knew something was wrong.”

Kennedy’s assassination has spawned many conspiracy theories. But in his book, Blaine says, he hopes to tell the full story as viewed by the people who were closest to the action.

“We really wanted to set the record straight,” Blaine said. “The conspiracy theories have grown so much that many of the agents who passed away were accused of being part of a conspiracy.”

Hill says that he puts no stock in conspiracy theories, and that he and the other nearby agents did their best to protect Kennedy. After the first shot, Hill said, he ran from the trailing car and jumped on top of Kennedy’s vehicle to protect the president and his wife.

It all happened so fast, Hill said, that he didn’t think much.

“Not much time to be thinking; it’s more just strictly reaction,” Hill said. “I guess the thought was, ‘How the hell did this happen?’ ”