Five former members of John F. Kennedy's Secret Service detail gathered at Georgetown University on Monday night for a public discussion of their time serving the iconic president. The event, which included a preview of an upcoming Discovery Channel documentary on the agents' careers, touched on the defining facets of the Kennedy presidency and ranged from lighthearted anecdotes about time with the first family to somber recollections of Kennedy's assassination in Dallas in November 1963.

Among the most powerful moments of the night occurred when Clint Hill -- famously visible in the Zapruder film of the assassination as he climbed onto the back of the president's limousine -- spoke about those first terrifying minutes in Dallas.

"When I got to the presidential vehicle, just as I approached it, a third shot rang out, hitting the president in the head, just above the right ear and left a hole about the size of my palm," Hill recalled, his voice halting. "There were blood and brains spewed about over myself and the car." 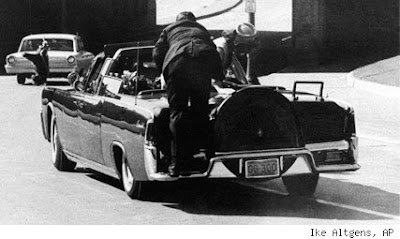 When Hill finally managed to get Jacqueline Kennedy off the trunk of the limousine, where she had climbed, the motorcade began speeding to Parkland Hospital, where the president was pronounced dead a half-hour later. According to Hill, there were few moments of cogent conversation during the brief trip. "She said something about, 'Oh, Jack, what have they done? What have they done?' " Hill recalled of the former first lady.

or the agents, the chance to reunite for the documentary and a book -- "The Kennedy Detail," co-authored by former agent Gerald S. Blaine and journalist Lisa McCubbin -- was part of a long-deferred healing process. For the film, the agents returned to Dallas and the scene of the shooting. "Going back to Dallas was an opportunity to let my emotions finally be released," Hill said.

"After the assassination, we had a responsibility to go to work," said Blaine, who was also on the president's Secret Service detail that day. "We didn't have trauma counseling or anything else. We decided we were probably going to have to resolve the issue within ourselves."

The agents also discussed life in the White House -- even addressing rumors of an affair between President Kennedy and Marilyn Monroe (unfounded, as far as they knew). They also explained that, despite their rigorous training, they were often unprepared for the star-struck awe they experienced at presidential events with such Hollywood figures as Bing Crosby and Frank Sinatra.

The agents also recalled unexpectedly leaving a campaign stop in Chicago to head back to Washington in October 1962. The given reason was that the president had a cold, but the agents knew better. The Soviet Union, of course, was building missile sites in Cuba, igniting a standoff that took the United States and the Soviets to the brink of nuclear war for 13 days.

Blaine, who was with Kennedy for most of the crisis, recalled that the president was visibly strained during the negotiations with Soviet Premier Nikita Khrushchev. But when the threat had finally passed, Kennedy made sure to let his security detail know. "I was down in the Situation Room after he finished talking to Khrushchev," Blaine said. "He came out and said, 'Well, are you ready to go to Palm Springs?' So that's when we knew everything was going to be okay."

The agents also discussed more lighthearted moments with the first family, whom they liked personally.

"She was a closet smoker," Hill, now in his late 70s, said of Jacqueline Kennedy. "A lot of times we'd be riding in the car going to Middleburg and she'd say, 'Mr. Hill, can I have a cigarette, please?' . . . And I'd get in the backseat and light the cigarette and give it to her. Nobody knew that. And as soon as anybody showed up, the cigarette was put in my hand very quickly." Hill laughed. "I became the smoker."

Besides personal healing and an obligation to history, the agents said they had another reason for speaking out 47 years after Kennedy's assassination. With the book and the documentary, they hope to set the record straight -- and put assassination conspiracy theories to rest. "Most of history today has been written by what I call a cottage industry called 'conspiracy,' " Blaine said. "If we didn't speak up and give a balance to this, history would never know exactly what happened."